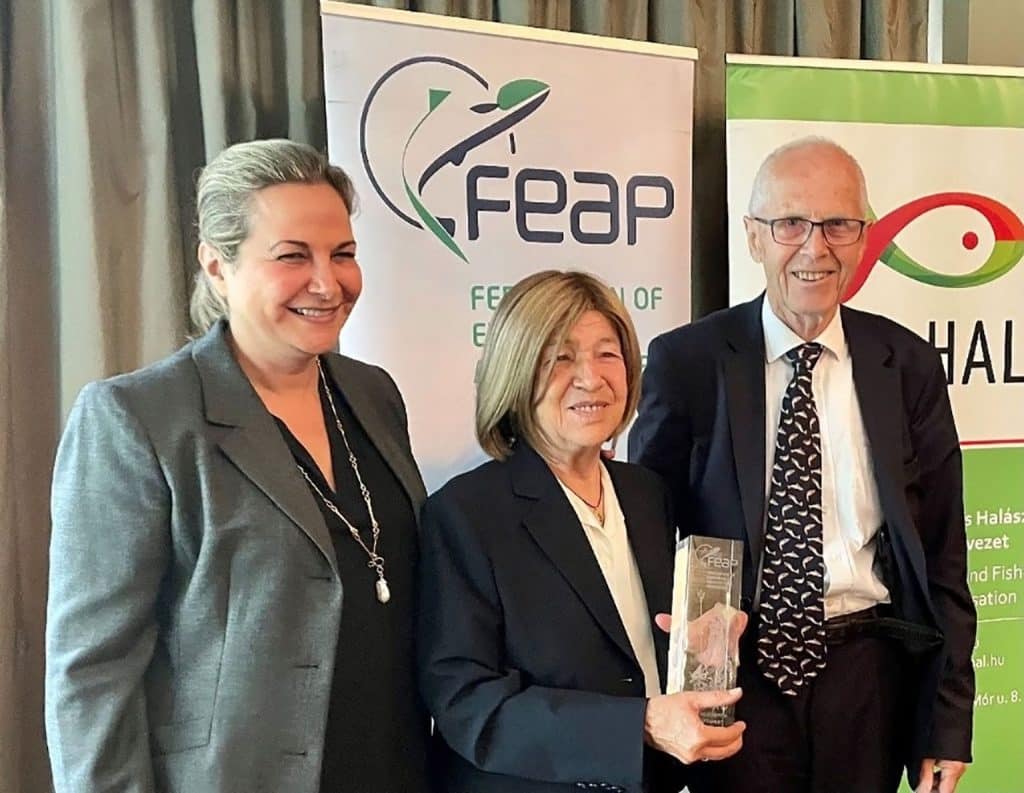 Award of Excellence from the Federation of European Aquaculture Producers (FEAP) to Ms. Nancy Panteleimonitou.

Significant recognition of her work.

The President, Mr. Apostolos Touralias, and the Board of Directors of the Hellenic Aquaculture Producers Organization (ELOPY), with particular pleasure and pride, congratulate Ms. Nancy Panteleimonitou, President & CEO of Galaxidi Marine Farm, Member of ELOPY, for the Federation of European Aquaculture Producers (FEAP) Award of Excellence awarded to her during the Annual General Assembly held in Budapest on Thursday, June 9. This award represents FEAP’s recognition of an individual’s outstanding contribution to the development of fish farming in Europe. Nominees are nominated by FEAP Members and the decision is made by previous recipients of the award.

Ms. Panteleimonitou is a real pioneer of the sector in Greece, as she has dedicated more than 35 years to the Mediterranean fish farming sector, contributing substantially to the development of the sector at an administrative, scientific and institutional level.

It all started in 1987 when the pioneering Norwegian company Marine Farm ASA was looking for a partner for the production of Mediterranean species in Greece and recognized Ms. Panteleimonitou as the ideal candidate. With the also worldwide pioneer of aquaculture Mr. Bjorn Myrseth and a group of scientists from the United Kingdom they founded the Galaxidi Marine Farm. Ms. Panteleimonitou became the only female founder of a fish farming company in the entire industry and the first female CEO of a fish farming company worldwide. Since then and under her leadership, Galaxidi Marine Farm has developed into one of the largest companies producing Mediterranean fish farming species in the EU, with a significant contribution to the development of research and innovation, as she has participated and directed many research projects.

All these years, he showed a strong interest in the institutional and collective actions of the sector. He is a founding member and has served on the Boards of Directors. of the Hellenic Seafood Association (H.ETH) and the Hellenic Aquaculture Producers Organization (ELOPY) and is the first representative from Greece in the Medaqua Committee of FEAP, which she even helped to establish as a very important forum for bream producers and sea bass.

Her passion and dedication to fish farming have made her a model woman and entrepreneur. What is less well known, largely due to her modesty, is that her passion for fish farming is combined with her passion for philanthropy, as she has tirelessly and generously benefited her hometown of Galaxidi, supporting local schools, hospitals, nursing homes and vulnerable groups.

In addition to her success as a self-made entrepreneur, she is above all a mother figure to her extended family of colleagues, co-workers and employees. For Ms. Nancy Panteleimonitou, Galaxidi Marine Farm is a lifelong dream and for all of us at ELOPY the first lady of fish farming, consistently and practically proving the role of the sector in the social and economic development of the country.