As part of the development of the combat capabilities of the AW149 helicopter, the Leonardo concern organized a series of tests covering the firing of various types of missiles. The armed AW149 was ordered by Poland, but at the moment the Italians are focusing on the British tender for forty-four helicopters to replace the Puma.

Arming trials took place in an undisclosed European country (Hungary is known unofficially) in the last quarter of last year. During them, during seventy flights, over 200 unguided 70-millimeter missiles and the same missiles with mounted warheads aimed at the reflected laser light were fired. Shooting was organized day and night; missiles during level flight, diving and hovering. Single rockets and volleys were fired for a maximum range of up to 4 kilometers.

Measurement instruments and a set of cameras were installed at the main elements of the helicopter – engines, fuselage, armaments – during test shooting. The collected data made it possible to confirm that the fired rockets were kept at a safe distance from the airframe and to extend the envelope of permissible flight parameters during shooting. In addition, they allowed the introduction of improved algorithms for fire solutions in the on-board computer.

“It was great to be able to test the integrated mission and weapon systems that make the AW149 a true multi-role helicopter,” said test pilot Lee Evans. – The radar and the optoelectronic head allow for quick target acquisition. In addition, the AW149 is well suited as a weapon carrier as it is very maneuverable, allowing it to quickly turn towards the target. Precise driving of the helicopter allows for quick development of fire solutions by the computer and, ultimately, effective shock of the target.

The sample presented at FIA 2022 was used for armament trials.
(Maciej Hypś, Konflikty.pl)

The latter ability to quickly turn towards the target is advertised by the manufacturer as one of the four characteristics that increase the survivability of the helicopter on the battlefield. The others are: a fuselage designed to withstand high overloads and optimally withstand high forces, including those from hard landing, ballistic protection for the cockpit and transport cabin, the ability of the transmission to run without lubrication for fifty minutes and a multiplication of basic systems. In addition, the minimum ninety-minute resistance to the disintegration of the main rotor blades after being hit by a 12.7 millimeter bullet has been experimentally proven.

Leonardo is examining the possibility of shutting down the AW149 production line in Italy and relocating it to another country if the helicopter wins the British tender for a medium helicopter. At the moment, both the military AW149 and its civilian counterpart AW189 are manufactured in Vergiate, Italy.

In connection with the signing by Poland on July 1, 2022 of the contract for thirty-two helicopters, an additional assembly line is to be created at PZL-Świdnik. Leonardo, however, announced that in the event of a victory in Great Britain, his factory in Yeovil would be responsible for the production of helicopters of this type for the British needs and for export. As a result of this potential overcapacity, closure of the production line in Italy is contemplated.

Stefano Villanti, Leonardo’s vice president of sales, said the final decision would depend in part on any further orders from Poland and their exact shape. He also announced great involvement in the production of Polish industry, at a level similar to the offer for Great Britain, but the final shape of this cooperation will depend on the requirements of the Polish Ministry of Defense.

The transfer of production will only apply to the military version of the AW149. Civilian AW189s are to continue to be manufactured in Vergiate. 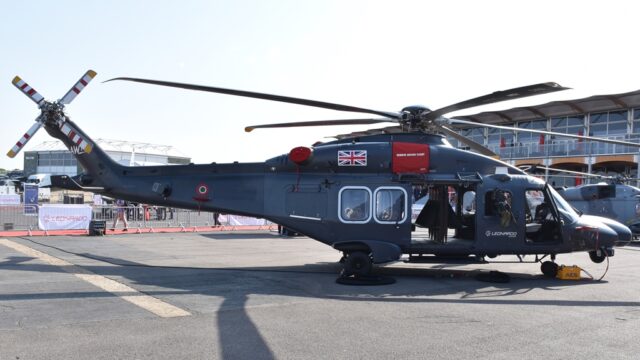 The AW149 is one of the proposals in the British tender for a successor to Puma helicopters.
(Maciej Hypś, Konflikty.pl)

Meanwhile, in Yeovil, despite the ongoing tender, preparations for the production of AW149 are underway since the beginning of the year, which could be launched at the end of this year. Many British workers were sent to Vergiate for hands-on training in AW149 production. In addition, additional necessary equipment and tools have already been ordered. They should be delivered by the end of the year.

“We will have sufficient equipment to start production by the end of the year,” said Mike Morrisroe, Leonardo UK Head of Division. – We collect the necessary equipment so that in the event of winning the British tender, we can start production immediately.

Morrisroe added that the factory would be able to deliver the first helicopter within twelve to fourteen months of signing the contract. At the same time, he noted that this time could be extended if the RAF wanted to make many changes to the configuration of the base helicopter. At the same time, it made a reservation that it cannot guarantee that the production of AW149 will be launched at Yeovil if the Italian helicopter does not win the British tender.

Other representatives of the group, Alessandro Profumo and Gian Piero Cutillo, also preferred to talk about the situation in which their helicopter would win the British tender. The message of the day was that it would be a win-win situation for Britain and Leonardo. However, both refrained from making any declarations in the event of AW149 failure.

– We will make the decision on the day we find out that we did not win – said Alessandro Profumo. “We don’t want to blackmail anyone by threatening to shut down the Yeovil factory.