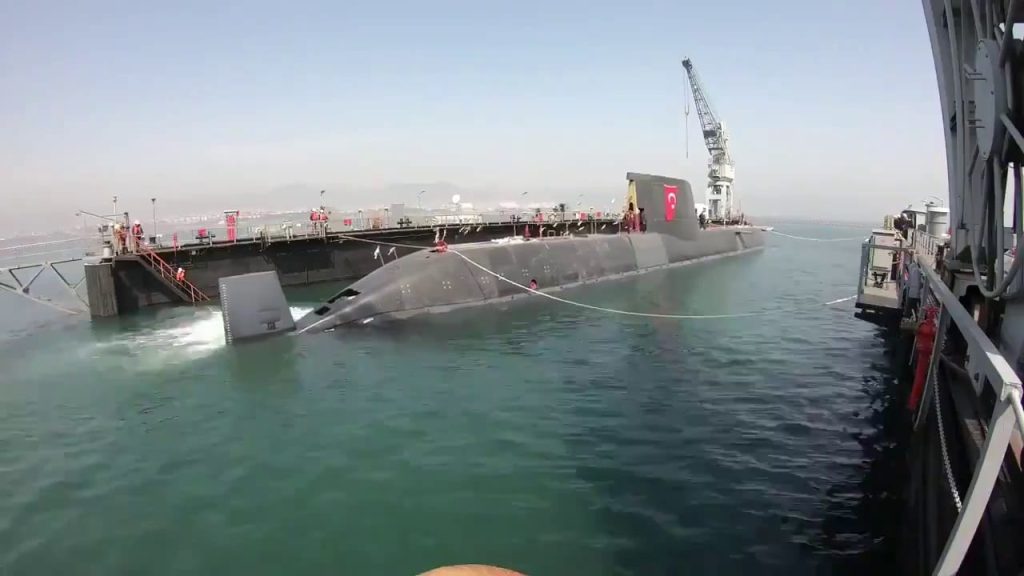 Greece once again called on Germany to freeze Turkey’s plans to sell 214TN submarines. Foreign Minister Nikos Dendias stressed that the planned sale of the six units would disturb the balance of power in the Mediterranean and Aegean Sea. Turkish-Greek relations are in a very bad shape and both countries – NATO allies – are sitting on a powder keg that could explode at any moment.

“These submarines could change the balance of power in the Eastern Mediterranean in favor of a country that, despite being a NATO member, threatened Greece with war,” Minister Dendias told reporters after meeting his German counterpart Annalena Baerbock.

Dendias also accused Turkey of violating the sovereign rights of Greece and other countries, as well as the occupation of the territory of Cyprus, which is a member of the European Union. He took up another topic that evokes emotions not only in the Aegean Sea: the issue of German compensation for Athens for losses and damage caused during the Second World War.

“The question of German reparations remains open to the Greek government and Greek society,” said Dendias. – The solution to this problem is a matter of principle and would be beneficial for both countries, it would significantly improve Greek-German relations.

Another issue I raised today is the export of German war material to Turkey, particularly Type 214 submarines, which the Prime Minister has also raised with the Chancellor. pic.twitter.com/FhO8i5zrw6

“Fighting within the alliance is what the Russian president wants,” Baerbock said, emphasizing that the Aegean islands are Greek territory and no one has the right to question it.

After the meeting, the German minister emphasized that it was important for NATO members to resolve their conflicts through dialogue. She added that she would deliver the same message during her trip to Turkey. Earlier, in Mejaro Maksim (the official seat of the Greek prime minister), she met Kiriakos Mitsotakis, with whom she discussed the energy crisis, the war in Ukraine, migration and Turkish provocations. The head of the Greek government stated that the channels of communication with Turkey should remain open, provided that international law and good neighborly relations are respected by both parties.

Turkey received the Piri Reis type 214TN submarine, the first of six Reis-class vessels, in July 2021; entry into service was scheduled for 2022. At that time, Athens also objected and asked Berlin to consider the transaction. The then German Defense Minister Annegret Kramp-Karrenbauer was said to have told Greek counterpart Nikolaos Panajotopulos that the program to build the six Type 214 submarines could not be stopped – or even delayed – because ThyssenKrupp Marine Systems was bound by contracts signed back in 2002.

The contract for the construction of the Turkish version of the Type 214 was signed more than a decade ago. The keel for the first vessel was not laid until October 2015. The sale of ships carries not only political but also economic risks. In addition, for several years there was a struggle with the problematic transfer of technology, which contributed to the financial problems of TKMS.

The launching ceremony of the second ship of the 214TN series – Hızır Reis.
(Turkish Ministry of Defense)

Athens’ concerns are therefore justified, but it is extremely interesting that in the Mediterranean it is Greece and Israel that have the largest number of air-independent submarines (Type 214 and the modernized Type 209). Moreover, it is rather unlikely that all newly introduced Turkish ships will operate in these two waters. Some of them will serve in the Black Sea.

The type 214TN submarines will replace the six 209/1200 units that entered service in the years 1975–1989. It was originally assumed that they would all be operational by 2027, but at present this seems impossible. In May, only Hızır Reis, the second representative of the series, was launched and the keel was laid for the last ship: Selman Reis. Turkish ships are to be armed with domestic Akya torpedoes and ATMACA Block I / II anti-ship missiles.

The chance of suspending the construction of Reis-class ships is negligible, but Greece is not giving up and is trying to convince the Germans in every situation that completing the construction of ships for Türk Deniz Kuvvetleri is a bad idea. According to The Economist, the move gives Turkey an advantage over Greece and could destabilize the Mediterranean region. The calculation is simple: the Greek Navy currently has five air-independent ships, giving USNI News a strategic advantage in the Southeast Mediterranean and Aegean Sea.

If Germany supplies the ships, Turkey will have an advantage over Greece. However, when we add Israel to this equation – which is naturally closer to Athens – it still does not look bad for the Greeks. In January, Jerusalem signed a contract to purchase three Dakar submarines. They will replace the Dolfin-I units (Dolfin, Leviathan and Tekuma) and complement the Dolfin-II type: Tannin, Rahaw and Drakon. The schedule for their entry into service remains unknown.

Ankara is making further plans for four to six domestic air-independent submarines (MILDENs) to arrive in the line in the second half of the 1930s. They will replace the aging Turkish type 209/1200 submarines. The new units may be armed with maneuvering missiles constructed under the program code-named “Gezgin”. Conventional cruise missiles will have a range of approximately 1,000 kilometers and will be suitable for launching from sea platforms. According to available information, it is supposed to resemble the American Tomahawk or the Russian Kalibra.

The introduction of the MILDEN ships – although distant in time and still uncertain – in the second half of the next decade is expected to change the balance in the region in favor of Turkey. The underwater arms race is therefore at its best, but it is only a fraction of the total in the rivalry of opposing NATO allies.