Promotion of the FA-50 in Europe

This year’s European tour of the South Korean aerobatic team Black Eagles is not intended to please aviation fans at air shows. First of all, it is a KAI marketing campaign aimed at increasing sales of FA-50 and related models on the European market. At Farnborough International Airshow, KAI’s vice president responsible for international markets, Lee Bong Keun, stated that the company’s goal is to sell 1,000 of this family’s aircraft worldwide in ten years.

This figure also includes the planes that the Koreans hope to sell to the US Air Force and Navy in their separate competitions for new advanced training aircraft. In the USAF, this program is called Advanced Tactical Trainer, and in the US Navy – Tactical Surrogate Aircraft. In both cases, a training plane is sought with characteristics similar to fighters, but many times cheaper to use. These planes will be used not only for training, but also as aggressors.

While the T-50 will potentially be a training aid for the Americans, the FA-50 can be a primary combat force for many other air forces. Many countries in the world still have second and third generation combat aircraft, such as the F-5 or MiG-21, in their armament. Moreover, the international isolation of Russia after the attack on Ukraine may make many countries want to withdraw weapons of Soviet and Russian origin more quickly, and traditional buyers of these weapons, fearing Western sanctions, will look for other suppliers.

At Farnborough, the FA-50 was presented only as a model.
(Maciej Hypś, Konflikty.pl)

The new FA-50 marketing cooperation agreement signed between KAI and Lockheed Martin is to help in the fight for global markets. From the very beginning, both companies collaborated on the construction of the first T-50, which was created specifically for the training of future F-16 fighter pilots and was to be as similar to the Viper as possible.

So far, the T-50 and related combat versions have been sold only in Asia. Of course, the largest user is the South Korean Air Force, armed with sixty FA-50s, sixty T-50Bs and twenty-two TA-50s.

As for other users of the training and training versions, Thailand acquired twelve T-50THs, and Indonesia acquired fourteen T-50Is (six more are in production). In contrast, Iraq and the Philippines bought combat versions, twenty-four T-50IQ and twelve FA-50PH respectively. According to unconfirmed information, the first user from another continent is to be Colombia, which will receive at least twenty TA-50 and FA-50 in unknown proportions.

In 2019, Koreans were close to selling ten FA-50s to Argentina, but the deal was blocked by the United Kingdom. London still has an arms embargo on Argentina, and as the FA-50 has six British-made components, it also has a say in all international deals. At the end of 2021, KAI offered ten FA-50s to Slovakia looking for modern advanced training aircraft for future F-16 pilots. The M-345, M-346, Hawk and L-39NG are also taking part in the competition. Ten planes would cost Slovakia $ 500 million. 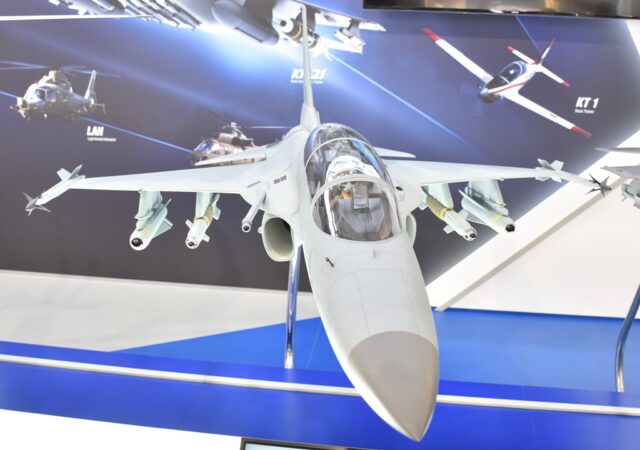 The FA-50 model was presented with a probe for taking fuel in flight using the flexible tube method. During the American TX competition, an aircraft adapted for refueling with a rigid boom was presented.
(Maciej Hypś, Konflikty.pl)

– The war between Russia and Ukraine has clearly shown how important it is to have combat aircraft ready to perform tasks – explained Lee Bong Keun. – At the moment, more than 200 FA-50s are in use in the world, which makes it the most proven light combat aircraft. It is a multipurpose aircraft, which can be used in peacetime to train pilots, and in the event of an emergency, it can perform combat tasks. Due to the great interest in the F-35 in Europe, we believe that the FA-50 is an ideal solution for training future F-35 pilots. This is due to supersonic speed, short recovery time for flight readiness and high interoperability with the F-16 and F-35.

For the record, it must be clarified that the number of 200 examples applies to all versions of the aircraft, not only the combat ones.

FA-50 and the case of Poland

It is an open secret that the Polish government is interested in the South Korean plane. Unfortunately, it is difficult to find any information on this subject in government communications. However, it is known that the government delegation visited South Korea, where they got acquainted with the offer of the local industry, and within a dozen or so days the Black Eagles aerobatic team will arrive in Poland.

On the second day of the visit to South Korea, a Polish delegation headed by min. @mblaszczak talked about the possibilities # cooperation with the president and representatives of the management staff of the defense company KAI. pic.twitter.com/OgNNFLNBq0

It should be emphasized that formally, the Ministry of National Defense is not currently conducting any tender for light combat aircraft or advanced training aircraft. The possible purchase of the FA-50 would therefore be another example of a purchase in recent months without competitive procedures. On the other hand, an informal competition can be observed, because the Leonardo has been intensively promoting its light combat aircraft based on the M-346 for a long time in Poland. It seems that if both producers had not expected to achieve significant profits in Poland, they would not have promoted their products so intensively. So it can be said that it is a duel for the efficiency of the lobbyists of both producers.

A visit to Farnborough International Airshow made it possible to obtain some information directly from a second source – a representative of KAI. First of all, he informed that the expected visit of Black Eagles to Dęblin was not related to the immediate or immediate signing of the contract. It is supposed to be a simple presentation of the plane and its capabilities. The Koreans did not want to disclose any details. It was possible to find out that at the present stage of the talks they concern from twenty-four to thirty-two aircraft, but these are not final numbers.

The reason why the Koreans offer Poland the FA-50 (or vice versa: the reason why Poland became interested in this plane) was presented in an interesting way. Well, according to the representative of KAI, the Americans are now reluctant to sell additional F-35s or new and used F-16s to Poland, which would seem a much more logical move on the part of Poland thinking about further expansion of aviation. After all, even the used F-16C “from the desert” are aircraft with much greater combat capabilities than the FA-50. However, it has not been indicated exactly why the American reluctance would have resulted, but only generally indicated the war taking place abroad. 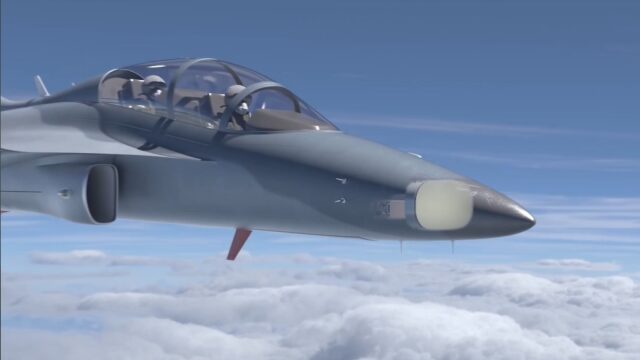 Visualization of the PhantomStrike radar built into the FA-50.
(Raytheon)

The manufacturer’s representative also referred to another allegation in relation to the Korean aircraft, namely too limited combat capabilities for a machine that was supposed to fight the Russians. In the current configuration, air-to-air armament is limited to the AIM-9L / M / P / S Sidewinder short-range missiles and the cannon. On the other hand, the air-to-ground armament consists of GBU-12 Paveway II, GBU-38 / B JDAM guided bombs, Mk 82 free-fall bombs and AGM-65A / B / D / G Maverick guided missiles. The whole is complemented by the Sniper Advanced Targeting Pod.

Referring to the aforementioned special partnership of KAI and Lockheed, the manufacturer’s representative stated that the issue of integrating medium-range air-to-air missiles (by default AIM-120 AMRAAM) with the aircraft due to the high compatibility of many FA-50 and F-16 systems is only a matter of updating software. Moreover, the integration of the aircraft with AESA class radar is a matter of the near future. Most likely, it will also be the new Raytheon PhantomStrike light radar on display at Farnborough, designed specifically for lightweight platforms where there is no room for larger radars. At the customer’s request, there will also be an option to install another radiolocation station, but for the time being it will not be possible to install the radar from the KF-21 fighter. At the moment, the FA-50 is equipped with the Israeli Elta Systems EL / M-2032 radar. Of course, it remains an open question as to how much the price of the aircraft with these modifications increases.

See also: The Netherlands is looking for mortars and circulating ammunition