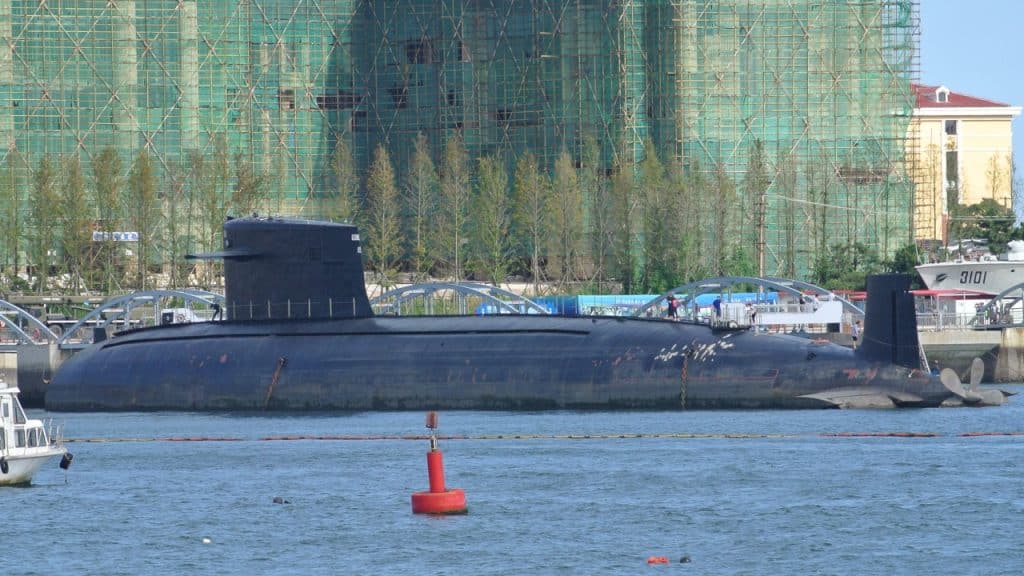 There was information in the media about work on a long-range nuclear-powered torpedo in China. At the same time, information began to flow in about the work on autonomous torpedoes operating in the swarm. Hence, it is not far to the vision of torpedo banks traversing the Pacific to attack the US Navy near its home bases. We are dealing here with an information war, is there really something to do?

The Hong Kong daily South China Morning Post cites the results of research by a team led by Guo Jian of the Chinese Institute of Nuclear Energy, which was to complete work on the concept design of a cheap nuclear-powered torpedo. The assumptions are simple, but the idea itself seems crazy. The torpedo is to receive a single-use nuclear reactor, allowing it to achieve a constant speed of just over 30 knots for 200 hours. After this time has elapsed or the area of ​​operation has been reached, the reactor is to be discarded and the torpedo equipped with a conventional warhead will switch to battery power.

The advantages of the system are low costs and the possibility of firing from standard torpedo tubes. The biggest savings were made on the reactor design. According to the SCMP, Guo’s team was to drop most of the radiation shields. Only some critical components are to be covered. Inside the reactor itself, most of the coatings made of rare earth metals were to be replaced with “cheap materials such as graphite.”

Such a miniature reactor would “generate over 1.4 megawatts of heat”, all using less than four kilograms of low-enriched plutonium. However, the price for such a structural system is to be very low efficiency, only about 6% of the generated heat would be converted into electricity to propel the torpedo. However, this is enough for a one-way trip. In theory, the ability to work for 200 hours allows you to travel over 10,000 kilometers, i.e. the distance from Shanghai to San Francisco.

Although small power reactors are gaining more and more interest as a cheap and safe supplement or alternative to nuclear power plants, the Chinese project raises serious doubts. First of all, it is about the poor insulation of the reactor and the associated environmental impact. Guo allegedly assures that it will be small, the staff is not even to need protective suits, but on the other hand, the fission reaction is to be initiated at a safe distance from the host, about half an hour after leaving the launcher. This suggests developing a nuclear torpedo design with submarines in mind.

The safety and disposal procedures for used reactors raise even greater doubts. After being rejected by the torpedo, a safety mechanism is to be activated to stop the chain reaction. Even in the event of damage to the casing, the interior of the reactor is to fill with seawater, and falling to the sandy bottom is to ensure that no critical failure occurs.

“Even if the hull is broken, the interior is filled with water, and the whole body falls into the wet sand on the seabed, the reactor will not have a critical accident. The safety is ensured. “

The SCMP compares the Chinese torpedo to the Russian Poseidon. However, both projects are radically different. The 2M93 Posiejdon is an unmanned underwater vehicle (autonomous torpedo) about 20 meters long, supposedly capable of descending to a depth of 1,000 meters, reaching a speed of 56 knots and a range of 6,200 nautical miles. The armament is to be a thermonuclear warhead with a capacity of up to 100 megatons. This one of Russia’s “super weapons” was designed to attack coastal cities, harbors and shipyards, as well as aircraft carrier strike groups. In addition, the warhead with a power of several dozen megatons, apart from the thermal impact and a shock wave, can cause an artificial tsunami. The Poseidon carrier K-329 Belgorod was accepted into service on July 8.

Chinese submarine carrier of the Type 094 ballistic missile.
(US Navy)

The Chinese project is on the other side of the scale, and its purpose is not to sow fear in the hearts of the enemies of the Chinese Communist Party with the threat of an artificial tsunami, but to maximize the range of conventional torpedoes. It is therefore more similar to the 9M730 Buriewiestnik nuclear cruise missile (storm). The missile has already been tested several times, but apparently the attempts have not brought the expected results, and the project has not been in the media for the past three years. Another interesting, not to say: significant difference is the range provided by miniature reactors. The Chinese give a specific, strategically justified distance at which the miniature reactor is to operate. In the case of Buriewiestnik, Russian sources speak of an almost unlimited range.

A more interesting thread pointed out by the SCMP concerns the concept of using nuclear-powered torpedoes. The newspaper combines the work of the Guo team with the concepts of Ma Liang from the Naval Submarine Academy. In her research, Ma focuses on swarming intelligent torpedoes. Artificial intelligence is to enable autonomous selection and attacking of targets. According to Ma, such torpedoes would be able to prepare ambushes for enemy ships on the other side of the ocean or in areas where it is difficult for manned units to penetrate. The hard-to-detect swarm would accept commands from people or systems managing larger unmanned units.

It appears Russia may be preparing for a new test of its 9M730 Burevestnik nuclear-armed and powered cruise missile. https://t.co/fnhb7EynXy pic.twitter.com/ayAFCOFwtB

Ma’s concepts bear some resemblance to the American Golden Horde, a data link that integrates various weapons systems. In the case of the American program, however, it is about integration into a swarm of aviation systems operating at relatively short distances, such as SDB bombs. How the Chinese want to resolve the issue of connectivity underwater and over huge distances remains unknown.

The very idea of ​​attacking the US Navy near its home bases echoes the Japanese strategy of the 1920s and 1930s. The Imperial Naval Command invested heavily in the development of high-speed, long-range torpedoes and heavy warheads. The American fleet marching across the Pacific was to be attacked from a surprisingly long range by submarines deployed along the way, and closer to Japan by destroyer flotillas. The battleships were supposed to strike the weakened enemy.

The effect of these assumptions was, among others, the sensational Long Lance, which was the cause of many unpleasant surprises for Americans. However, the development of in-flight aviation meant that the war in the Pacific from the very beginning took on a completely different character than the Japanese strategists and planners assumed.

This type of news falls on fertile ground in Washington and is an excellent argument for supporters of increasing the Pentagon’s budget. In this particular case, however, the doubts go beyond the feasibility of the idea. The SCMP refers to an article by Guo published in the Journal of Unmanned Undersea Systems. In fact, such a magazine is published by the Chinese shipbuilding corporation CSIC, but as Howard Altman emphasizes in The War Zone, and we confirm, all attempts to find Guo’s article have failed.

In addition, the Hong Kong daily does not provide consistent information. The working time of the mini-actor is estimated at 200 hours, but there are also 400 hours. On the other hand, service life may depend on the speed at which the torpedo is traveling. However, such things are clearly marked.

Once again, the deteriorating quality of the South China Morning Post becomes apparent. As Beijing tightened control over Hong Kong, censorship and propaganda also entered the former British colony. In this way, the journal has become another propaganda tube, although the content it contains still represents a significantly higher level than those in China Daily or Global Times.