In terms of physically present airplanes and helicopters, one of the largest participants of this year’s edition of Farnborough International Airshow was Turkey, and especially its largest air concern, Turkish Aerospace, exhibiting, among others, the Hürkuş training and training aircraft, the Hürjets training and combat model, a model of a new generation fighter, Gökbey and ATAK helicopters and unmanned aerial vehicles.

– Exhibiting at one of the most important aviation fairs in the world is all the more important to us as we present products developed entirely by us – said the president of Turkish Aerospace Temel Kotil. – We are proud to be able to present the Hürkuşa and the ATAK helicopter in the air. I hope that at the next fair we will be able to show the Hürjet in the air, whose first flight is scheduled for March 18, 2023.

Recently, Turkish Aerospace has achieved several export successes. Three Anka unmanned aerial vehicles with two control stations were sold to Kazakhstan. Also, three Anka-S kits and three control stations were sold to Tunisia. In addition, a contract for the delivery of ATAK helicopters for the Philippines, which has already received the first two machines, has finally been completed. The successful use of Turkish weapons in Syria, as well as during the wars in Libya, between Azerbaijan and Armenia and in Ukraine, causes the products of the Turkish aviation industry to be very popular.

A full-size model of the TF-X fighter was displayed at the fair. The current status of the program was also informed. The presentation of the actual prototype is scheduled for March 18, 2023. Such a precise date is not the result of a precisely followed schedule, but is of political importance. It will be the 108th anniversary of the sinking of three and the damage to four Allied ships during the Dardanelles’ campaign of World War I. The first flight is scheduled for March 2025.

It was also announced that the TF-X prototype will be powered by US General Electric F110 engines that have already been delivered to the aircraft manufacturer. However, it is not the target propulsion for serial aircraft. Turks want the TF-X to be powered by a domestic engine that rival companies TRMotor and Tusaş Engine Industries are working on. In addition to selecting the engine for the prototypes, tunnel, mechanical and heavy-weather tests were also carried out.

1,300 Turkish engineers supported by 100 BAE Systems engineers work on the design of the TF-X. Companies from other countries are also involved in the program. In addition to the US engines, the design software was provided by Dassault Systèmes and Siemens, and these tunnel tests were carried out in the US, UK and South Africa.

TAI once again presented a mock-up (in the title photo) of the advanced training aircraft with the possibility of carrying Hürjet weapons. Three prototypes are currently under construction, and the first flight is also scheduled for March 18, 2023. The prototypes will be powered by the General Electric F404 engine, but the European EJ200 is also being considered for serial aircraft. The Turks would like to launch F404 licensed production at the Tusaş plants, but their relationship with the Americans is difficult after the purchase of Russian S-400 anti-aircraft systems and their exclusion from the F-35 program.

The aircraft is being developed with the intention of replacing the T-38 Talon aircraft in the Turkish Air Force. Although the construction of prototypes has only just begun, the Turkish Ministry of Defense has already placed an order for the first twelve Hürjets. The first serial copy would be delivered to the Air Force in 2025.

The aircraft is to reach a speed of Mach 1.2 and an altitude of 13,700 meters. The lifting capacity was calculated at 6,000 kilograms, including the on-board radar, electro-optical and infrared sensors. Avionics and other systems are to be largely based on those used in Hürkuş. 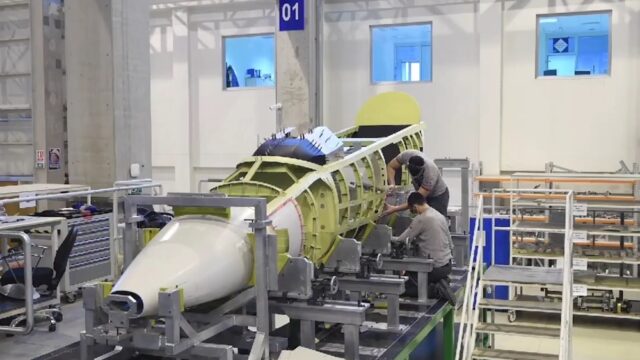 Hürjet is also promoted on foreign markets, and Malaysia may become the first customer. The potential order concerns eighteen aircraft in the first tranche with an option for eighteen more. The Malaysian Ministry of Defense said it is considering designs as diverse as the MiG-35, L-15, Tejas, FA-50, M-346 and the Hürjet. The Turkish offer includes the possibility of producing fifteen out of eighteen aircraft locally in Malaysia.

The Hürkuş training plane was on display both at the static exhibition and in flight. Hürkuşa was developed in three variants: basic Hürkuş-A, advanced Hürkuş-B (with HUD, “glass cockpit” and GPS navigation system) and training and combat Hürkuş-C.

In late 2021, it was announced that Niger would be the first foreign buyer of the Hürkuşas. It is unofficially known that the country ordered twelve aircraft in the C combat version. According to equally unofficial information, Hürkuşy-C also ordered in May 2022 Libya, which has expressed interest in these aircraft since 2014. Talks about the sale of Hürkuşes are also being conducted with Azerbaijan. Unfortunately, the nature of these countries, as well as Turkey itself, means that transparency in reporting on arms purchases cannot be counted on. On the other hand, discretion may encourage potential customers to do business with Turkey. 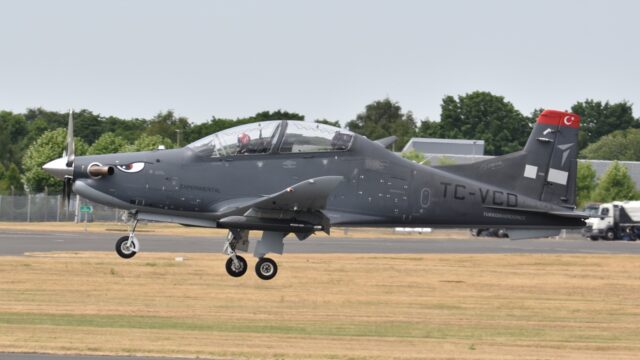 Hürkuş is 11.2 meters long and 10 meters wide. The drive is a Pratt & Whitney Canada PT6A-68T turboprop engine with a five-blade HC-B5MA-3 propeller, which accelerates the machine to a maximum speed of 574 kilometers per hour. In the C version, the maximum weight of the weapon is 1,500 kg on five suspensions.

Anka is the first Turkish MALE (Medium-Altitude Long-Endurance) class drone, i.e. operating at medium altitude and characterized by a long flight distance. Each system consists of three unmanned aerial vehicles and ground control devices. The maximum take-off weight of the drone is approximately 1.6 tons, and the payload – about 350 kilograms. Anka can operate continuously for eighteen hours. The range allows it to be operated by a controller 200 kilometers away, and the maximum flight altitude is 7010 meters. It moves at a maximum speed of 217 kilometers per hour. Anka-S is additionally equipped with a satellite connection, so its range is not limited by the distance from the controller. 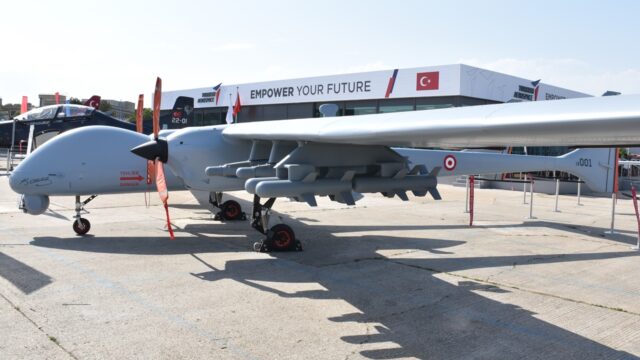 Kazakhstan has not only ordered Anki, but will also have an assembly line for these unmanned aerial vehicles. On the other hand, the Tunisian authorities have signed a contract for the purchase of three Anka-S drones. The contract value is to be around EUR 65 million. As part of it, in addition to drones, three ground control stations will be provided. It is also planned to train fifty-two Tunisians – operators and mechanics. Talks are underway to sell Anek-S to Malaysia, and the transaction, apart from at least three systems, would include a license for selected types of ammunition.

The TAI stand also presented the Anka-Aksungur unmanned aerial vehicle (also of the MALE class), adapted for reconnaissance, surveillance and reconnaissance with the use of specialized mission equipment. It also has the ability to carry weapons. Unlike the classic Anki Aksungur, it is powered by two PD-170 engines. Thanks to this, equipment and weapons weighing about 750 kg can be attached to it. For comparison: an ordinary Anka takes a load of up to 350 kilograms. Aksungur can operate for twelve hours at a distance of approximately 250 kilometers from the operator.

The well-known T129 ATAK attack helicopter was once again presented in the air. In March, TAI breathed a sigh of relief as deliveries of these helicopters to the Philippines began. The first export contract for the T129 was implemented with difficulties. Deliveries were to begin in 2019, but the transaction was blocked by the Americans. Due to sanctions imposed by Washington on Turkey over the purchase of S-400 systems, the Donald Trump administration refused to allow the export of LHTEC T800-4A engines developed and produced by the American Honeywell and British Rolls-Royce. The matter started only after the change of president. In May 2021, it was reported that President Joe Biden’s administration had accepted the contract. 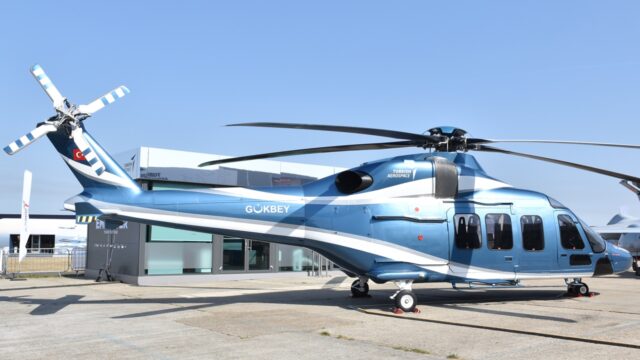 A prototype of the multi-role T625 Gökbey helicopter was also exhibited at the fair. The development program for this structure goes according to plan. In mid-May, the fourth prototype was made for the first flight. The construction of the helicopter is carried out as part of a state program aimed at creating an entirely Turkish helicopter.

The T625 Gökbey is a medium helicopter with a take-off weight of about 6 tons. It is powered by two Tusas Engine Industries TS1400 engines. Earlier prototypes had engines developed by a consortium of Rolls-Royce and Honeywell LHTEC CTS800 4-AT, but the Turks had already developed their own solution. The new engines allow the helicopter to accelerate to 306 kilometers per hour, the range is 750 kilometers. The helicopter was equipped with a glass cockpit with two touch displays measuring 8 × 20 inches and two measuring 8 × 10 inches. In addition, the helicopter is equipped with an infrared vision system, a four-axis autopilot and an automatic flight control system that reduces the pilot’s workload, especially when hovering.

The helicopter can be used to transport troops and cargo, transport important personalities, medical transport, search and rescue missions and many civilian tasks. A maximum of twelve soldiers can be transported in the transport cabin. The first transport version of the helicopters is to be delivered to the Turkish military police by the end of the year.